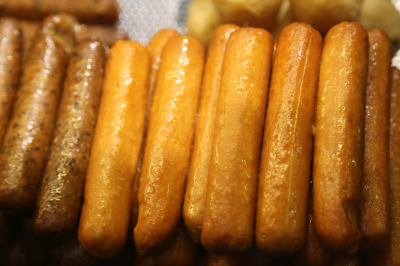 Everyone loves a good sausage. It’s a very versatile food, you can have it as a snack, or make a meal out of it. Most people enjoy a good sausage, but don’t know much about how they’re made or where they come from. Sausages are made from almost any meat available, even chicken meat. With so much variety the world over, there is truly a sausage for every taste.

In this article, we’ll discuss sausages of all different kinds, where they come from, and even show you a great fresh chicken sausage recipe.

What is Sausage Exactly?

Sausage is essentially meat combined with fat and other herbs, spices, and preservatives. Sausages are available in casings, such as links, the most popular form of sausages, or ready-made mixed patties.

Sausages are available fresh or cured. When fresh, the sausage needs to be cooked before eating. When cured or dried, the sausage is already cooked, so you can just eat it right out of the casing.

What makes different kinds of sausages unique are what spices they are mixed with and how they are prepared. Different peoples and cultures all have their own cuisine, a unique set of ingredients and flavor combinations. Of course, sausage is just one example. You will find a wide variety of sausages in world cuisine, from hot, spicy Chorizo to mild Kielbasa, each with its own distinct flavor.

Now that we have a better idea of what sausage is, let’s explore its history and learn a bit more about how this tasty product came to be.

You will be surprised to learn that sausages used to be considered lower-class food, something that the well-off wouldn’t ever consider eating. As sausages evolved over time, however, they became some of the most gourmet food products in the world.

Back in the day, sausage was made using the extra meat and trimmings usually rejected by the butcher. Instead of putting these scraps in the waste basket, people found a way to make use of them. They did this by mixing the trimmings in fat and salt, in this way preserving them. In this way, sausages were first used as a way to preserve extra meat that would have otherwise gone to waste.

People have always been using salt to give meat some extra flavor and make it last longer. It’s what allowed explorers and immigrants to survive long trips across dangerous seas, barrels of meat preserved in salt. As people got used to sausage over time, it became something that people wanted to eat frequently, a main dish and no longer a way to keep leftovers.

Originally, sausage is made by one of three methods: smoking, drying, or salting the meat. The earliest types of sausages were made exclusively of pork. More meats were added over time and today sausages of all meats can be found.

The more popular sausage became, the more people grew to love it and appreciate it not as a low cost food but as something delicious, even gourmet. In response cooks and butchers began using better cuts of meat, and the quality kept  improving to what it is today, a gourmet food with enough variety for all tastes.

In modern times, making sausage has become an artisanal profession. There are literally thousands of varieties of sausage worldwide, each as unique as the region it comes from. Let’s explore the different kinds of sausages along with a few of the most popular ones worldwide.

Fresh sausage is made from fresh meat, that is, meat that has not been cooked. Since it’s fresh it must be kept frozen until ready for use, otherwise it could go bad. Some of our favorite kinds of fresh sausage are: Sausage patties, Bratwurst, Italian.

There are a few ways to cook fresh sausage, such as grilling or steaming. When cooking fresh sausage, be sure to cook through completely. You don’t want to see any pink when you’re done cooking. To prevent the sausages from popping and spraying grease all over your kitchen, break through the skins with a knife to relieve the pressure.

Pre-cooked is by far the most widely eaten kinds of sausage. We’re certain you’ve tried it before, even if you didn’t know it at the time. Pre-cooked sausages include: Hot dogs, Bologna, Mortadella.

These sausages are known for having a pureed filling enclosed in an outer lining. With these sausages, both the lining and filling are cooked through entirely, so all you have to do is re-heat it.  How you choose to heat your pre-cooked sausage is up to you. If you want a more rustic look, grilling will give you a beautiful char. If you can’t cook outside, you can always fry them in a pan or broil them. Either way, since they’re already cooked, your only concern is heating them to an edible temperature.

Obviously, smoked sausages are prepared by smoking. They are put up in a smokehouse or placed in a smoker, where a fire burns low and slow, releasing smoke which cooks and flavors the meat. Types of smoked sausage include: Andouille, Kielbasa, Italian sausage.

Since smoked sausage is already cooked, you can eat it just as it is. It’s very popular and can be found in any deli store or supermarket.

Cured sausage is one of the most unique kinds of sausage because of the way it’s cooked. Made fresh, the sausage is then salted and hung up to dry for months at a time. This process is what is known as curing. During the curing process, the salt, exposure to air, and time work together to cook the meat. Some popular kinds of cured sausage are: Culatello, Coppa, Cervelat.

Amazing all by itself, cured sausage also goes well on bread or crackers.

And now, because we know you love sausage as much as we do, here’s a great recipe using fresh chicken to make your own homemade sausage!

Not only is chicken more nutritious than other meats, but it also has less fat. So whether you’re watching your weight or just want to reduce the fat levels in your diet, this recipe is for you. Not only is chicken good for you, but it’s available in any grocery store you find yourself in. That way you won’t have to make unnecessary trips to a specialty store to find ingredients. A lean sausage packed full of flavor, we’re sure you’ll enjoy making it as much as you’ll enjoy eating it.

What You Will Need

You’re all done! You can refrigerate your sausages for use the next day, or put them in the freezer for later.

Sausage is a food that’s simple to prepare and can be enjoyed in many different ways. Whether on a sandwich or as a side, sausage is a dish that can be made to fit any meal. With so much variety, there’s really a flavor for everyone. If you are interested in learning more about our chicken meat sausages and how they’re made, visit our blog at poultryeu.eu.

Do you want to become our customer?

Please sign up to receive an offer and get personal manager service.